Naamah and the Ark at Night

Naamah is the wife of Noah, and her name means “great singer.” For forty days and forty nights, as the ark tosses on storm-wracked seas, Naamah sings. She sings to the animals two-by-two. She sings to her husband, her sons, and their wives. She sings, and they all sleep, finally at peace.

Strictly speaking, a ghazal (pronounced “guzzle”) comes to us from the Middle East. It’s an Arabic word that means “talking to women.” (How perfect is that meaning for Naamah’s story?)

Here are the basics:

The traditional ghazal is so beautiful! You can find examples by conducting an internet search online.

That said, many Western poets take liberties with the traditional form, and so did I.

One of the biggest liberties is that my ghazal is a continuous development of one subject, Naamah.

To write this poem, I first determined my refrain: night.

Then I determined Naamah’s movement throughout the ark at night. (For me, story comes first.) Then I figured out the rhymes so that they would be organic to her story.

The result? Eleven couplets with rhyming words that move Naamah throughout the ark.

This captivating interpretation creates a remarkable partner for Noah, who uses her special talent in a memorable way. (Kirkus Reviews, starred review)

Lovely and lyrical … Bartoletti and Meade take a most familiar story and make it breathtakingly new. (Booklist, starred review)

In an author’s note, Bartoletti explains the Arabic poetic form, the ghazal, that inspired the structure of her poetry. Young listeners who hear her bedtime verse will be aware only of its soothing rhythm carrying them to the final ‘Hush hush hush, good night.’ (School Library Journal)

It’s a story of quiet confidence and comfort, during trials of truly biblical proportions, as well as a gentle bedtime book. (Publishers Weekly)

The hardcover of Naamah and the Ark at Night is available from your favorite independent bookseller, your public library. or these online retailers: 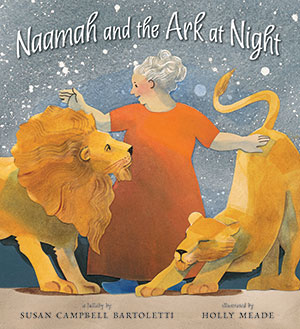