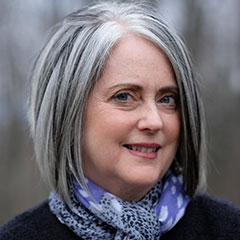 To download a version of this photo, click on a link below, then right-click or option-click, choosing to “save image as.”

Susan Campbell Bartoletti has published poetry, short stories, picture books, and novels, but she is best known for her award-winning nonfiction books.

Bartoletti has been called a “fearless researcher.” She uses primary sources such as images, photographs, oral histories, interviews, letters, and other archival materials to breathe the past to life. Her nonfiction subjects include child labor, the Great Irish Famine, Hitler Youth, the KKK, the woman who became known as Typhoid Mary, and woman suffrage.

“I’m often asked if I write to show young people today how good they have it,” says Bartoletti. “I don’t. I hope that my work gives my readers courage—courage to question and to think critically about history; courage to consider and respond to their social, political, and existential responsibilities; and, most of all, courage to stand up.”

“Guest Speaker: That Was Then, This Is Now,” Susan Campbell Bartoletti, Booklist, 1 October 2017