Find this book at your
favorite library or used bookseller. 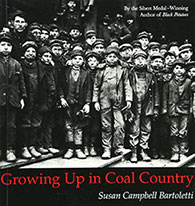 Sent from Poland to Pennsylvania to be married to a coal miner, thirteen-year-old Anetka lives a totally new life in a harsh environment she doesn’t understand, in this volume of the Dear America series.

Bartoletti has added a nuanced tale to the Dear America series with this diary of a 14-year-old from Sadowka, Poland,1896. Annetka lives with her beloved grandmother and small brother; her mother is dead, and her father has gone to Pennsylvania to work in the anthracite mines. She loves the place where she is, but all that changes when her father says she will come to America to be a bride for one of his coworkers. Annetka goes, in the company of a rakish young fellow named Leon who gets her and her brother out of the country. Annetka’s diary continues through the backbreaking labor of the coal miner’s wife, for she discovers her new husband is a widower with three small children. The struggles of laundry, cooking, baking, and making ends meet in Lattimer, Pennsylvania are clearly delineated, along with Annetka’s joy in beekeeping, in making scented oils, and in coaxing her three small stepchildren to love her. Leon and others urge the workers to strike as they fight not only the filthy and dangerous mines but also the vilification of those who call them foreigners and worse. The story culminates in the Lattimer massacre of September 10, 1897 where unarmed workers were fired upon and at least 19 died. The whole is full of Annetka’s spirit, her vivid use of language in snatches of her native Polish as well as her wonderful English metaphors, like kisses “to stick her feet to the floor.” (glossary, historical photographs, maps, recipe) (Kirkus Reviews)