buy the hardcover
buy the ebook 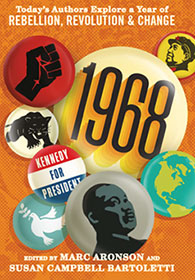 “The Rights of Man.” What does that mean? In 1789 that question rippled all around the world. Do all men have rights—not just nobles and kings? What then of enslaved people, women, the original inhabitants of the Americas? In the new United States a bill of rights was passed, while in France the nation tumbled toward revolution. Anthology editors Marc Aronson and Susan Campbell Bartoletti, along with ten award-winning nonfiction authors, explore a tumultuous year when rights and freedoms collided with enslavement and domination, and the future of humanity seemed to be at stake.

Some events and actors are familiar: Thomas Jefferson and James Madison, Marie Antoinette and the Marquis de Lafayette. Others may be less so: the eloquent former slave Olaudah Equiano, the Seneca memoirist Mary Jemison, the fishwives of Paris, the mathematician Jurij Vega, and the painter Élisabeth Vigée Le Brun. But every chapter brings fresh perspectives on the debates of the time, inviting readers to experience the passions of the past and ask new questions of today.

As they did in 1968 (2018), Aronson and Bartoletti examine a single year through many different angles, focusing particularly on liberty, subjugation, and the question of who counts as a person.

Tanya Less Stone opens the volume with the fishwives of Les Halles marching on Versailles. Bartoletti tells the story of Élisabeth Vigée Le Brun, who painted Marie Antoinette wearing a casual cotton chemise—a small act of rebellion. Meanwhile, formerly enslaved West African Olaudah Equiano publishes his autobiography in London; the Swedish king, Gustav III, enacts a surprising degree of social equality; Jurij Vega, a soldier in Belgrade, calculates pi to 140 digits; and a Scottish geologist called James Hutton begins to understand the true age of the Earth. Mary Jemison, born into a Scottish Irish settler family but adopted into the Seneca Nation, relays messages between the new Americans and the democratic Haudenosaunee. Wesleyan missionaries—including Equiano, a convert and abolitionist—upset the social order by bringing Christianity to enslaved West Indians. And a mutiny on the Bounty disrupts the food chain to the sugar plantations. By the end, topics which start out as snapshots are shown to be pieces of a larger portrait, giving the reader a broad sense of the turmoil in the United States and Europe at this time. Each chapter is thoughtfully written and thoroughly researched, with extensive author notes, endnotes, and a bibliography.

Aronson and Bartoletti (1968: Today’s Authors Explore a Year of Rebellion, Revolution, and Change) offer a timely deep dive into another turbulent and pivotal year of history: 1789. Thought-provoking essays by 12 nonfiction authors rewind to the period when structures of imperialism and slavery collided with Enlightenment ideas of individual rights and freedoms. Cynthia and Sanford Levinson examine unresolved contradictions in U.S. founding documents in “Who Counted in America?”—while Joyce Hansen’s “All Men Are Created Equal” recounts the life of Olaudah Equiano, a Methodist abolitionist who was enslaved as a child and published his famous autobiography in 1789. In “The Choice,” Aronson details the complex negotiations between Thomas Jefferson and Sally Hemings in Paris on the eve of the French Revolution. The conversational narrative styles will pull readers into this wide-ranging, thoroughly researched anthology, which recounts revolutions and revolutionary thinking big and small. Extensive author and source notes and a bibliography conclude this stirring read about themes that continue to shape urgent contemporary issues. Ages 12–up. (Publishers Weekly, starred review)

As they did in their previous anthology, 1968: Today’s Authors Explore a Year of Rebellion, Revolution & Change, the editors take a pivotal year in world history and, through eleven essays (by authors including themselves, Joyce Hansen, Steven Sheinkin, and Summer Edward), explore global revolutionary themes… Each essay can be appreciated individually, but the overall picture, of societies reconciling competing ideas of science and faith or equality and oppression, becomes clearer throughout the book. Appended with author notes, documentation, and a complete bibliography of sources. (The Horn Book)

An essay collection that will attract readers who want to learn about the history of personal freedoms or have a deep interest in the topic. (School Library Journal)

This collection of eleven wide-ranging essays bridges American and world history course matter to demonstrate that episodes encountered as disparate curricular units emerged from a Zeitgeist of revolutionary thought. (Bulletin of the Center for Children’s Books)

The hardcover of 1789 is available from your favorite independent bookseller, your public library. or these online retailers: 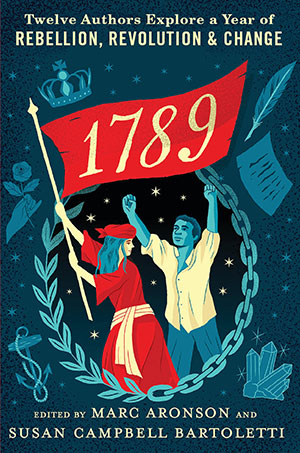 The ebook of 1789 is available from your favorite independent bookseller, your public library, or these online retailers: